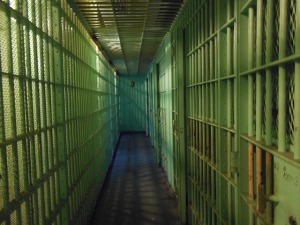 A planned breakout from Long Bay jail has been thwarted after the farewell card for the culprit was accidentally circulated to the guards for signing.

“Like any workplace, when someone is about to leave we like to send a card around for everyone to write a funny little message on it wishing them well at their new location,” admitted lifer Frank “The Axe” Haffey. “Unfortunately some dill wasn’t sure who to give the card to next and they left it on the table in the guard’s break room. Next thing you know the screws have busted into my cell and have found my tunnel.”

“Frank’s been a pretty popular guy here so when we found out he was leaving we had a whip around for a present and bought him a giant oversized card so we could wish him all the best,” said Haffey’s cellmate Danny “Kneecapper” Walsh. “We got him a gold plated shiv with his name engraved on it and had enough cash left over to toss in a $50 Myers voucher and a box of snout.”

Several of the guards signed the card before the head warden checked the records and discovered that Haffey wasn’t due for parole until the year 2035. While most of the guards were unsure who Haffey was and had simply written “all the best”, one had written a clever limerick and another had drawn a cartoon of the convicted murderer relaxing on a beach in Mexico with a beer in his hand.

“We knew something was amiss when we smelt a cake being baked in the prison laundry,” admitted the prison governor Leonard Godber. “Then when all the inmates gathered together during the afternoon tea break in the number plate painting factory for an impromptu farewell party I ordered a search of all the cells.”

Like Loading...
‹ Pauline Hanson To Boycott Trump’s Inauguration Over Black Tie Dress Code
Man Covering Face With Australian Flag Calls For A Ban On The Burka ›