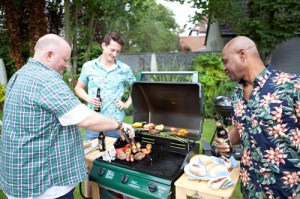 A man at a Connells Point barbecue who boldly stated that he doesn’t know much about politics before embarking upon a rant about what’s wrong with the state of the world has proven to be 100% correct.

“I thought maybe this guy is being a bit modest about how much serious reading he’d done on the subjects of history and economics but it turns out his original self assessment of being a pig ignorant boob was absolutely spot on,” said school teacher Tony Bancroft about the speech he listened to with feigned interest as he helped turn the sausages on the Beefmaster 3000. “There was a lot of repetition of the terms “dose of common sense” and “ivory basket weavers in their chardonnay towers” and an interesting detour into how the Jews were secretly running the United Nations. Admittedly he had warned us in slightly less words that he was a complete tit who knew Buckley’s about anything so I guess we shouldn’t have been surprised.”

“I always like to let people know when I’m about to speak directly through my clacker so I use the phrase “I don’t know much about politics” as a personal welcome to country ceremony before spraying some bullshit around a social gathering,” said Blakehurst mechanic Brett Kirk. “I was pretty happy with how tonight’s lecture on the results of the US election went because my old material about the nanny state stopping me from riding my jet ski wherever I wanted to was getting a bit stale. I might give it another run on the sideline at the kid’s cricket match on Saturday morning and then get to work on a whole new five minutes for that wedding in the Hunter Valley on Sunday week.”

Armed with a diversity of background knowledge gained from watching both A Current Affair and Today Tonight on alternate evenings, Kirk proudly points to his metaphorical diploma from the University of Ray Hadley.

“I live by the theory that the less I know the less chance I have of being wrong,” said Kirk as he expertly managed the movement of the sausages that had been put on first to the cooler parts of the hotplate. “I really don’t know the difference between a liberal, a neoliberal and someone who votes Liberal but I do know its about time us guys who were shit at high school were given a chance to run the world.”