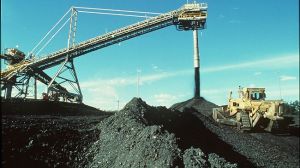 A jubilant Queensland Premier Anastacia Palaszczuk has announced her Government will celebrate the state’s State of Origin win by opening a commemorative coal mine in the team’s honour.

Speaking to The (un)Australian ,the Premier explained: “What a win for the great state of Queensland and what better way to commemorate it than by opening a new coal mine.

“Not only will a new mine create jobs, but as it will be located near the New South Wales border the dust from the mine will blow over there. This will create respiratory problems for those south of the border and ensure we continue to win Origin for the foreseeable future.”

Former Prime Minister Tony Abbott also spoke to The (un)Australian about Queensland’s win and the commemorative coal mine, saying: “I don’t normally like to lose at sport or in politics, however if New South Wales’ loss means a new coal mine then I think that’s a win for all of us.”

Queensland’s new coal mine will open later this year as soon as enough of the Daintree rain forest is cleared for its construction.

Like Loading...
‹ Donald Trump Jr Releases Email He Received From Nigerian Prince
Dr Who Fan Claims Not To Be Sexist But Concerned About Ethics In Gaming Journalism ›