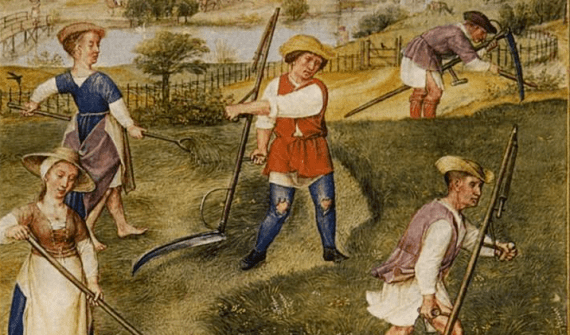 A medieval peasant is continuing to soldier on at work with a heavy dose of bubonic plague despite being urged to take a few days off by his boss and fellow workers.

“I noticed on Friday afternoon that Gary was a bit headachy and had a couple of large black pus filled buboes in his armpits and suggested he might want to take the rest of the day off,” said Aelfraed Jones, shift supervisor at the muck factory where stricken peasant Gary Dirtsmith works. “I’d much rather that he stayed at home, attached a leech or two to his neck, painted a red cross on his front door and waited to die but he’s a determined bugger and soldiered on with the help of a wormwood, licorice and comfrey poultice.”

“I reckon Gary just doesn’t want to waste any sick days on something pissy like the black death,” said disgruntled co-worker Geretrudis Ampleshanks. “It’s been noted around here that he always happens to call in sick on the same day they play that game where the whole village tries to wrestle a pig’s bladder to the far end of the neighbouring village.”

Medical authorities have warned that this year’s strain of bubonic plague is extra lethal, having already lain waste to a third of the populace in scenes of great carnage and woe, plus causing shops to completely run out of Strepsils.

“We advise staying indoors and killing any cats that may be holding down the rodent population,” advised apothecary Dave Bonesaw. “Oh great, I can feel my own pits getting a bit buboey. There goes the witchburning I was hoping to go to this weekend.”