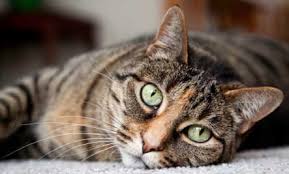 A shire man suspects that a Christmas present and card that he received today from his mum and dad’s cat may not actually have been bought, wrapped up and written by the pet.

“Mittens is a pretty smart cat, like he can open the back door by himself, but I just think that the whole process of going to the shops and buying me a gift and choosing a card is beyond his capabilities,” said Bangor accountant Craig Bypass. “I’m pretty sure he wasn’t even in the room when I mentioned how much I’d like a Garfield calendar.”

While unable to obtain an example of Mittens’s handwriting for comparison purposes, the writing on the card did contain several similarities to the writing on a note that Craig’s mother left telling him that she and his dad were going to be home late and that his dinner was in the oven.

“It’s always possible that Mittens might have dictated the thoughts he wished to express in the card to my mum,” said Bypass as he examined a tabby coloured hair that was stuck to a piece of sticky tape used in the wrapping. “He thanked me for all the pats and cuddles which I’d given him over the past year, which is exactly the kind of sentiment I’d expect him to convey.”

Bypass is now considering asking the family budgie Tweety if he wants to go halves in a present for his dad for next Fathers Day.

Like Loading...
‹ Berjiklian Tells Northern Beaches That The Only Reason To Leave The House Is To Gamble
The UnOz’s 2020 Person Of The Year! ›