Bob Geldoff has announced that not only will all funds raised from Band Aid 30 be going straight to the fight against Ebola in Africa, he will also pay tax for the first time, allowing the British and Irish Governments to double their humanitarian effort in the region. ‘I have spoken with my banker in Switzerland and we’ve decided it’s the least I can do,’ said Bob from his country estate in Kent. ‘But only this once.’

Band Aid 30 is a commemorative single of the original Band Aid release in 1984, ‘Do They Know It’s Christmas?’ The single brought together a bunch of rich white people singing about whether 500 million Africans knew when Jesus was born. There was doubt at the time whether 700 years of European colonialism had advised the Africans of this. There was also concern whether the African peoples had access to mince pies and bad teeth. And no snow? Madness! Since the 80s, Africa has come along leaps and bounds, what with AIDS, more wars, more famines and more rich white people telling them what to do. They just love it. And so now, with all their body organs turning to glue, why not bring back those same old rich guys and some new younger ones to ask Africa yet again, ‘When is Santa coming?’

This means one thing. Bono is back! Hide your iTune Libraries! Like Bob, Bono has offered extra incentive to the Band Aid cause this year, although this doesn’t involve paying tax. ‘I have my limits,’ said Bono. ‘But I’m prepared not to make another U2 album for a whole year.’

Giddy with this news, the younger artists on the production have chipped in as well. One Direction has offered to fly in one private jet instead of the usual seven and Chris Martin has kindly offered to shut up Gwyneth Paltrow for a whole month. Geldoff though has expressed disappointment in younger artists such as Adele who chose to donate privately to Oxfam and care for her 2 year old instead of taking part in Band Aid. ‘Quiet philanthropy is for morons,’ said Geldoff as he flew his helicopter into London.‘It’s thanks to me, that people like me can tell people like you to tell people like neither of us, it’s Christmas.’ The single is out Friday. 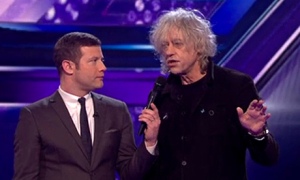 Like Loading...
‹ Media Goes Wild Over Man Saying What Women Have Been Saying For Years
Government Rules Out Working With Itself ›