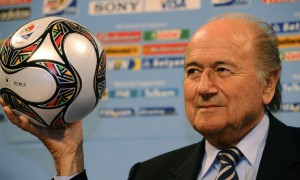 Qatar has been crowned champion football team of Asia after FIFA president Sepp Blatter declared them the surprise winners of Saturday night’s Asian Cup Final at the ANZ stadium.

“Football is about more than just scoring more goals in the final match or even being present on the pitch,” said Blatter as he handed the cup to Qatari captain Khalfan Ibrahim in front of 76,000 booing fans. “We carefully weighed up the bids from all the competing teams and although we must commend Australia for scoring and beating the Korean Republic in tonight’s match, we felt that the Qatari bid was superior in terms of the quality of the hookers provided for me and my fellow FIFA delegates.”

“Of course we’re disappointed in not winning the Asian Cup despite James Troisi’s extra time winner,” said a despondent Australian coach Ange Postecoglou. “But I guess we have to take it on the chin. Perhaps next time the Football Australia will make a better effort in terms of providing hookers for FIFA delegates. I personally thought sending Mark Bresciano around to their hotel room wearing a wig and a slinky dress would have done the trick, but I was wrong.”

Like Loading...
‹ Women Relieved To Find Out It’s All Their Fault
Tony Abbot Breaks Reset Button With Excessive Use   ›