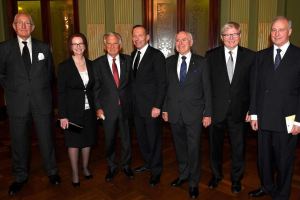 Millions of Australians this week have been reeling from news that their politicians lie. Hints of the scandal started appearring last week when the nation’s top paper, the one no one reads but everyone feels they should, broke a story with the headline, ‘Politician Changes Mind.’ This made financial markets nervous with the Australian dollar dropping three cents by Wednesday. ‘We just didn’t know what this news meant,’ said Chief Truth Analyst for Westpac, Damien Downer. ‘The markets are very sensitive to any fluctuations, particularly change, especially with minds, in particular those belonging to politicians, notwithstanding of course anyone else’s.’ Rumour and innuendo continued to build all week until the nation’s most hated paper, one that everyone reads but no one admits to, broke the scandal. The paper took an unlikely but predictable stance and decided to tell the ‘truth’, namely that politicians can’t tell ‘it’. The headline ‘All Politicians Lie’ has since dominated headlines, newsfeeds and the twittersphere. It’s left many wondering, what’s next?

‘This is quite devastating,’ said Suzie Smith picking up her toddler twins from kindergarten. “I mean, what am I supposed to say to my children? ‘No darling you can’t have an éclair because Mummy has changed her mind ????”” Ms Smith pondered what message this sends to her children. ‘Probably that I love them more than éclairs,’ she said holding back tears. ‘Which of course is a lie.’

People throughout the country have been seen leaving their work and homes wandering the streets with many debating whether it was worth looking forward to the weekend. ‘Thank God it’s Friday but is it really?’ asked Jimmy Jones, a local taxi driver and Candy Crush enthusiast. ‘How do we know that Friday won’t just change its mind and leave? Is the weekend really the end of the week? Is anything real anymore?’ he yelled out to passersby as he pushed imaginary candy around his phone.

Police and Health Officials are fearful of an epidemic of lies and people changing their minds this weekend. ‘If it’s good enough for our Prime Minister,’ said Sergeant Sam Smart, ‘Then it’s good enough for my grandmother. Let her cross the road, change her mind and get hit by a bus on the way back.’ He believed that she was hit this morning but due to the current political climate, finds it doubtful. ‘She did seem to be limping but who knows.’ Extra Police have been put on duty this weekend to monitor the influx of liars and people wondering what to do next. All politicians are expected to reconvene next week for further lies.

Like Loading...
‹ DVD Collector Sitting On Fortune
Greg Hunt Defends Exclusion From Climate Talks: ‘Not Really My Area Of Expertise’ ›