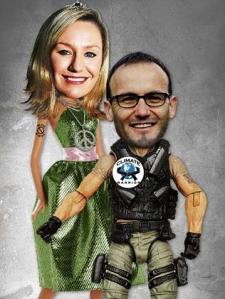 The Australian’s recent publication of a photo of Greens Senator Larissa Waters’s daughter, obtained from social media, to embarrass Waters over her stance on gendered toys has sparked a furious debate over privacy and the use of politicians’ children to score political points.

The (un)Australian gathered a group of bloggers and Twitter activists from across the political spectrum to discuss the issue. The discussion was, as expected, vigorous and robust. The following exchange between two participants best summed up the event.

“These odious, gutter dwelling, scum feeders just don’t have any scruples whatsoever! To sneak around Facebook and steal the photo of an innocent child just so you can smear your political opponents is a disgrace. Abbott is the ill begotten child of the Bush/Blair/Howard nexus. The world may very well have reached it’s lowest point in history!” exclaimed Liam Nettleton, whose blog, Rotting Empire, has a large following amongst his friends.

Lisa Smythe who tweets as @proudAussie and has 12 followers responded, “It’s a legitimate story. If these feminazis are going to tell us how to raise our kids then the public should know that they’re hypocrites! I mean boys will be boys and girls will be girls. It’s what made this country great. It’s what some of our grandfathers died at Gallipoli for!”

The (un)Australian interrupted the pair at that point to advise them that the debate had moved on while they’d been shouting strident, heartfelt invective at each other and was now about the Frances Abbott hacking controversy.

“Freya Newman is a warrior for truth,” said Nettleton. “It’s a travesty of the highest order that she was charged for revealing the truth about Abbott’s hypocrisy. I currently owe $34,000 for my communications – social enquiry degree from UTS and it will be a whole lot more if the Liberals pass their higher education destruction measures and if I ever get around to finishing it. All the while Abbott’s daughter gets a free handout because the owner of her school is one of her father’s cronies. It is a national disgrace and the people have a right to know.”

“Actually,” interrupted Smythe, “the disgrace is that a media outlet would publish private information about an independent, adult woman’s education just to try and embarrass her father. It’s a blatant breach of privacy by left wing journalists with their holier than thou attitude to rights, except when it comes to smearing their political enemies!”

Like Loading...
‹ Ricky Muir Not Sure What Party He’s In Anymore
Senator Lambie Doesn’t Rule Out Streaking For The Defence Force ›