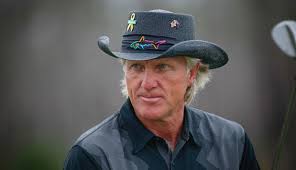 Australian golfer Robert Allenby was kidnapped, bashed and robbed over the weekend in Hawaii. Although shaken up, Mr Allenby is expected to recover. Golfing officials the world over were relieved to learn it was Allenby that was kidnapped and not fellow Australian golfer Greg Norman, as they feared if Greg were involved, he might have choked.

US PGA spokesperson Chip Thompson told The (un) Australian: “When we heard an Australian golfer had been kidnapped our hearts sank, fearing it was Greg Norman, as we all know with Greg’s history of choking this could’ve ended tragically. Boy, were we relieved to learn it was Allenby and that he was ok.”

The (un)Australian spoke to Norman who was in good health and in the middle of launching a new car with Holden: the Greg Norman classic featuring an automatic choke.

Like Loading...
‹ QLD Voters File Missing Persons Report For Tony Abbott
Dave Warner Scores Enough Runs For Australia To Forget About Him Being A Tool ›