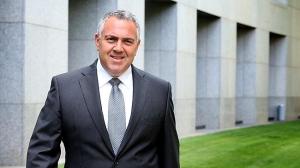 “It’ll be sweet. We just needed a little cash to get Australia through the weekend and besides the guy in the rabbit suit in the ad is so cute,” said Hockey as he puffed on a huge cigar while dressed like the rich bloke from the middle of the Monopoly board. “I’ll pay it all back from the weekly taxes and from that ten bucks that New Zealand owes us. The only other alternative was taking Tasmania down to Cash Converters to see what we could get for it.”

“These loan companies pray on desperate and naive treasurers like Joe Hockey who don’t understand the sort of debt problems they could find themselves in”, said economist Trevor Cherry. “I wonder if Joe has calculated what 700% per annum interest on a loan of 675 Billion dollars adds up to?”

A spokesman for a collection agency who wanted to be identified simply as “Knuckles” said it may be necessary to either break Australia’s kneecaps with a baseball bat or call in the IMF if the loan is defaulted.

Like Loading...
‹ Distributors Given Internet Addresses of Both People Who Illegally Downloaded ‘Housos Vs Authority’
Google Appears At Tax Hearing In New Company Uniform ›