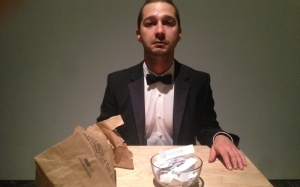 Hollywood actor Shia Labeouf shocked fans yesterday by announcing that for his next piece of performance art he would attempt to behave like a dignified adult.

“Starting tomorrow I’m just going to do normal stuff,” he told reporters before throwing a cup of his own urine in an old man’s face.

“I’m always looking to shock people with my wild interpretation of celebrity but after wearing a paper bag on my head, interrupting a cabaret show, weeping in public, assaulting some people, committing plagiarism, apologising for plagiarism with a skywriter, and then inviting strangers to sit in a room with me and watch me cry for my ‘I Am Sorry’ performance, there’s really just no where else to go except maybe sit at home and watch TV or have a quiet meal with some friends.”

The announcement of the ‘I Am Normal’ exhibit followed the Fury star revealing last week that during his ‘I Am Sorry’ installation, he was raped by one of the female onlookers.

“Although I’ve never done anything like this before I am pretty certain it’s totally common for women to go around raping men while they’re doing normal things like grocery shopping, exercising or having a coffee, so if any woman even looks at me while I’m doing those things, I will throw a cup of my own urine in their face.”

Like Loading...
‹ The (un)Australian Asks America: What Were You Thankful For?
‘We Did It!’ Daniel Andrews Wins Victorian Election, Which We Always Supported ›