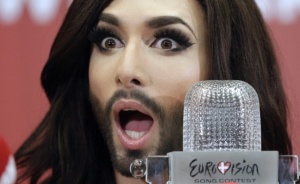 After the confusion of winning The Asian Cup, Australia woke up yesterday to the news that it was all an act and is actually still part of Europe. Austria discovered the mistake and rectified the error immediately. ‘We have put Greece in storage so there is plenty of room,’ said an Austrian official.

As a result, Australia has been asked by Austria to enter into this year’s Eurovision Song Contest, a competition in which all of Europe gets together once a year and celebrates the continent’s inability to dress and write a song. Austria will host the event after their country’s highest selling hipster, Conchita Wurst, won the contest last year.

‘Australians have always had a close affinity with Austrians through mistaken identity,’ said a Eurovision spokesperson. ‘It’s important then to further develop this bond between the two countries through bad music.’

Organisers have stipulated that the rules of the contest must be strictly obeyed, stating that it is imperative for Australia to enter someone who can’t sing, can’t dance and looks good in a curtain.

SBS will produce the act and remains optimistic that this can be easily achieved. ‘Australia has a proud history of producing terrible singers and celebrating them,’ said a spokesperson for the network. ‘Kylie Minogue in a hot pant, Kamahl in an infomercial, Iggy Azalea in a fight.’

Eurovision was originally started in the 1950s to fend off the cold war by singing out of key. It succeeded against fascism in Europe, but often struggled against other forms of totalitarianism ‘We forgot how much capitalists and communists love bad taste,’ said a local Van Trapp Family singer.

Australians generally have been relieved to find out that they are still European. ‘I never believed that Indonesia was to the north. It was all a front. I always knew it was Austria,’ said one man shredding his atlas.

Confusion however remains as to what this means for the country’s citizens.

‘I’m not giving up my Holden and watching poofs at the ballet,’ said a man in a singlet and a short pant.

‘I’m so glad I’ll be allowed to wear satin slacks in public again,‘ said a lady alighting from her Mercedes. ‘Will I be able to smoke and do hard drugs in cafes?’

Like Loading...
‹ Radio Host Calls For ‘Benign Fascist Junta To Shoot Anyone I Don’t Like’
Dennis Jensen Awarded The Simon Crean Medal For Services To Leadership Crises ›