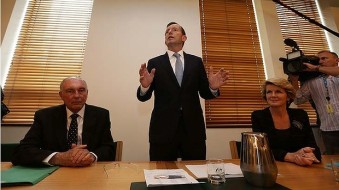 The federal government has unveiled a controversial new plan that will allow Immigration Minister Peter Dutton to strip Australian dual citizens who travel overseas to participate in equal rights referenda of their Australian citizenship. The move comes as up to a dozen Australian-Irish dual citizens are believed to have travelled to Ireland to vote in last week’s historic referendum on same-sex marriage.

The Prime Minister announced the new raft of anti-terrorism measures yesterday amid claims that cabinet was strongly divided from the issue. A senior cabinet minister from the Department of Communications and Broadband who wished to go unnamed confirmed that eight ministers had voted against the measure in cabinet.

Mr Abbott dismissed the claims of a divided cabinet as fanciful. “Just because not everyone agrees with the proposal, it doesn’t mean that the cabinet isn’t unanimous,” the PM said.

The government has found an unexpected ally in the Australian Council of Trade Unions (ACTU), which has seized upon the announcement and called on Qantas CEO and Irish-Australian Dual national Alan Joyce to provide evidence of his whereabouts during last week’s referendum.

Like Loading...
‹ Christopher Pyne Calls For A National Maths Debate
Government Under Investigation For Insider Trading After Betting Big On Unskilled Labour ›