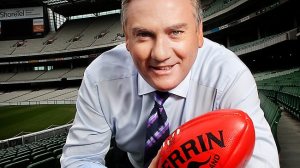 The NSW Upper House has today passed a resolution condemning AFL identity and celebrity head Eddie McGuire for being a ‘continual boofhead’. The motion was moved by Greens MP and pro halal activist Jamie Buckingham in response to McGuires ‘hate speech’ about Australian of The Year and all round footy legend Adam Goodes war dance against Carlton on Friday night.

While the motion eventually passed unanimously, The (un) Australian has learned it initially faced some debate and serious horse trading took place on the floor of the house to get the measure through. We understand the names of other boofheads, dickheads, idiots and outright bastards were collated by the party whips and circulated to party leaders before the motion was put. Cricket hero and big game hunter Glenn McGrath was included as an ‘outright bastard’ over the objections of the Shooters Party who later relented when the ALP gave them Bernard Tomic in return. Conservative Christian Fred Nile had Broadcaster Alan Jones included as a dickhead but could not get Satan on the list due to what The Greens said was an attack on freedom of worship. The LNP would only include Andrew Bolt in the smug bastard category if the ALP let them put Mark Latham in as completely f@(/img insane. Unanimity prevailed when Vatican head kicker and serial denier Cardinal George Pell was put in the ‘I wish I could get him alone for 10 minutes’ section.

So popular has the resolution proved that Parliament is considering making it an annual event. A cross party committee is being set up to take submissions from the public about who they think should be slagged off next.

Damien Ryan writes on social policy for The unAustralian. He keeps his enemies closer.