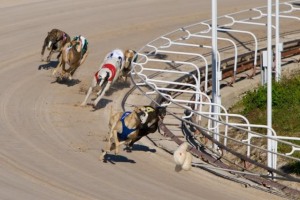 Farmers across New South Wales are bracing for a devastating increase in the population of mechanical rabbits after Mike Baird banned greyhound racing.

“Greyhounds are the only natural enemy of the mechanical rabbit and without them around, our fields are going to be overrun with swarms of hippity hoppity little bunny robots,” warned western NSW carrot farmer Trevor Gumboot. “Other biological controls such as myxomatosis and calicivirus are useless because germs don’t work on them.”

“People forget that before the introduction of the greyhound it was impossible to walk around the bush without the fear of falling into a mechanical rabbit burrow,” claimed lettuce farmer Sam Yosemite. “Some idiot in the 19th century let loose half a dozen mechanical rabbits and within ten years there were millions of them.”

Cruelty within the greyhound industry has been blamed on the competitive nature of the sport. Inner city schoolteacher Bryce Lentil believes a solution may be to completely overhaul the win at all costs attitude of greyhound racing.

“If every greyhound got a prize just for competing like at a school sports carnival there’d be no need to cull the slower dogs,” said the Erskineville primary school teacher. “Every dog would get a ribbon and instead of racing to be first to kill the lure the dogs should be racing to be first to give the lure a big hug.”

“I think school sports carnivals would be far more exciting if the slower kids were ruthlessly put down after every heat of the sack race,” said Athletics Australia official Arthur Jingo. “We’d do much better at the Olympics if every kiddie was more motivated to start running faster at an early age.”

Like Loading...
‹ Line Up For The Festival Of Stupid Ideas Announced
Bill Shorten Celebrates France’s Honourable Loss To Portugal ›