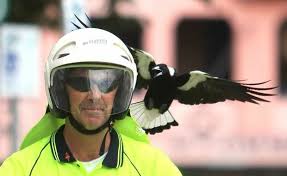 Dogs across Australia have reacted angrily after hearing that the head of Australia Post Ahmed Fahour is being paid a whopping $5.6 million a year.

“I’m furious that the head of an organisation dedicated to coming onto my turf dressed in provocative bright yellow gear just asking to be bitten is getting paid anything at all,” said Launceston fox terrier Spotty from behind her front fence. “I’m the one doing all the hard work hiding behind the elephant ear plant all day in the hot sun waiting for one of his goons to come by on his stupid little red motorbike.”

“My salary package consists of a daily bowl of Perrier water, a handful of Good Os and a new tennis ball every six months and that relies on me being a good dog for the entire year,” said the CEO of Australia’s dogs, Malcolm Turnbull’s fluffy white spanielly thing. “As far as I know this lazy bastard hasn’t dug a single hole in anyone’s back yard or barked at an aeroplane.”

Mr Fahour has defended his salary package saying it is well deserved because Australia’s dogs are mostly big nasty flea bitten mongrels and not poncy little lap dogs that postmen in France have to deal with.

“Anyway I don’t get paid my wages in cash. Last year I received $5.6 million dollars worth of Ken Duncan calendars and big rolls of sticky tape.”

Like Loading...
‹ Turnbull Suffers Further Blow Following News That Abetz Will Stay A Liberal
Man At Barbecue Able To Back Up His Claim That He Doesn’t Know Much About Politics ›