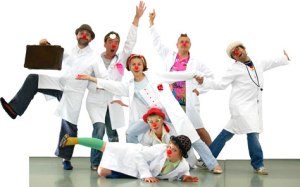 A man who posed as a doctor in the NSW health system for more than a decade has been betrayed after writing prescriptions that were way too easy to read.

“We got suspicious that this guy wasn’t a real doctor when we started getting complaints from the local pharmacists that people were handing in perfectly legible scripts written in an elegant longhand,” said Health minister Brad Hazzard. “The clincher for us was when we checked out his waiting room and found it stocked with magazines that were less than two years old, none of which were devoted to golf, luxury cars or gourmet travel.”

“Normally I have no idea what’s written on the prescriptions handed to me and I go away and faff around in the backroom for five minutes before returning with a plastic bottle full of placebos,” said Wyong chemist Barry Whitestarch. “But this guy was writing out requests for actual medications with such beautiful penmanship. He even put little circles over the “i”s instead of dots.”

Nursing staff voiced concern the doctor may have not been fully qualified when he referred to the heart as “that pump thingy” during a major operation, and began surgery for a brain tumour by making an incision in the patient’s foot.

“Despite not having a medical degree he was the best damn doctor we had in the system,” admitted Hazzard. “If only he’d posed as a homeopath or said he’d gotten his degree from the University of NSW. Then it wouldn’t have made a lick of difference whether his qualifications were genuine or not.”

Like Loading...
‹ Pauline Hanson Calls On Families Of Victims Of Flight MH17 To Leave Vladimir Putin Alone
ABC To Cut 4 Corners Back To 2 Corners Both On The Right ›