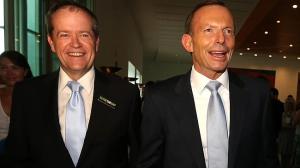 Despite a year marred by broken promises, declining polls and a failure pass to key budget measures, Prime Minister Tony Abbott is rejecting claims that he is leading a “failed” government.

The defiant prime minister told The (un)Australian: “Ah, sure, I acknowledge we’ve faced some difficulties, as all governments face, but I think it is only fair to acknowledge I have done what many thought was impossible — I’ve made Bill Shorten seem like he could win an election.”

“Don’t forget, six months ago no one could even remember the guy’s name. I sat opposite him every day at work and even I could barely recall what he looked like. But hold an election today and he’d take my job.

“Ah, and that’s not easy when you consider he parroted everything I said on war and anti-terror measures. Plus he is the exact sort of ex-trade union bureaucrat careerist factional hack the public have come to despise. I mean this is the guy who gave Paul Howes his break in politics, for crying out loud.”

On whether Shorten would continue benefiting from his mix of cruelty and stupidity in the new year, Abbott said: “Ah, you bet I am… ah… you bet he will.”