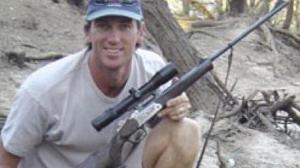 Former World Cup-winning bowler, car salesman and avid shooter, Glenn “Pigeon” McGrath has taken aim, literally and figuratively, at the bowlers currently competing at this years cricketing World Cup, telling them to man up and shoot something.

The World Cup has been mired by high- scoring games as the current fielding restrictions and cricket bat technology has geared the game in favour of the batsman. The ICC has agreed something must be done and is looking into amending some of the changes after the competition is completed. However, McGrath sees things differently and has called on bowlers to whip out their guns and aim at the stumps.

Talking to The (un)Australian in a trench that he dug on the hill at Bellerive Oval where he is currently staking out in the hopes of bagging some springbok, McGrath shared his thoughts, saying: “Bowlers today are weak, I mean Peter Siddle’s a vegetarian? How is that legal? In my day, the bowling unit would go out, shoot some stuff, drink the blood and bond. That’s how we won the Ashes. How’s Siddle and co going to bond over a banana?”

A spokesperson for Cricket Australia responded to McGrath’s calls, saying: “Glenn is a valued legend of the game, who’s been through some tough times, now Glenn put the gun down, come on buddy, let’s put the gun down, we don’t want to get the police involved.”

The World Cup can be seen on Channel Gem in between repeats of Friends and The Great British Bake Off.