Alan Jones Calls For Boots On The Ground In Parramatta Stadium 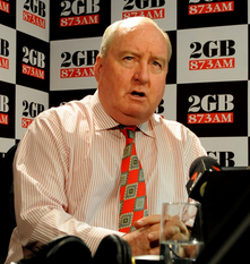 The veteran broadcaster made the call for military intervention into Parramatta on this morning’s show in response to reports that Western Sydney Wanderers fan group, the Red and Black Bloc (RBB), had publicly threatened a strike at tomorrow night’s A-League game at the Stadium.

“I have it on good authority that these RBB suburban terrorists are openly threatening the people of Australia with a strike at Parramatta,” the famously tough-talking Jones said. “My intelligence even tells me these thugs – let’s call them what they are, a death cult – are even boasting on Facebook about the size of the planned strike!

“How much longer before our gutless leaders grow a spine and take action? Mr Turnbull has got to prove he is up to this job and act now – bomb Parramatta Stadium then send in the diggers to secure it from this foreign threat!”

Jones’ listeners were left disappointed this morning, however, when planned guest to discuss the RBB terror threat, <i>Daily Telegraph</i> sports journalist Rebecca Wilson, was again arrested for drink driving on the way to the stadium.