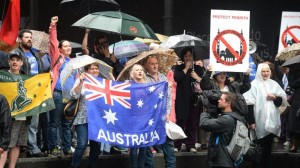 “Mate, you don’t just rock up on the day and start throwing thongs like a rank amateur,” complained world thong throwing champion Rick Toestrap. “I do several months at a high altitude training facility in Switzerland chucking clogs for eight hours a day to get my arms up to peak performance level. It’s a finely balanced program overseen by sports scientists from the AIS.”

“Has anybody stopped to think about the owners of $2 dollar shops,” said Becky Shod, president of the $2 Dollar Shop Owners Association. “There’ll be chaos if we have to cancel container loads of tatty Made in Myanmar bowler hats covered in Australian flags.”

Coalition minister Christian Porter criticised the councils, stating they should be sticking to their day jobs, before returning to his own day job of not having a parliamentary vote on same sex marriage.

“The best solution would be to retain January 26th as Australia Day but to change the meaning so that it becomes an inclusive celebration for all Australians,” said thong throwing historian Gavin Flipflop. “I propose we use it to honour the 26th of January 1979, the day that thong throwing legend Jacko “Tosser” Turner threw a Havaiana double plugger a world record 243 metres at the Tallangatta showground.”