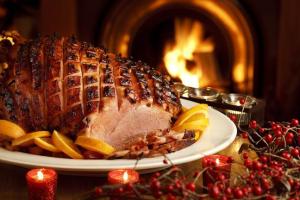 In a possibly devastating move for retailers looking forward to traditional Christmas sales to bolster their books, anti-halal campaigners have threatened new action — demanding all retailers guarantee that all their Christmas hams are not halal certified. Those who don’t face a boycott by campaign supporters.

Fresh from a successful campaign that scared the Fleurieau Milk and Yoghurt Company into dropping their halal certification, campaign organiser,Wyatt Bigget,spoke excitedly to the (un)Australian.

“We’ve just had a great win with this little, community-based company I’d never heard of before, forcing them to drop a really lucrative contract that could’ve helped open up international sales for them,” Mr Biggett said. “There’s been so much more media than we’re used to, so we’re all pretty chuffed and thought we’d better get onto a new target before any backlash started or our supporters had time to stop and think about things.

“Normally we target smallish businesses whose products we’d never buy anyway, but with all the attention, we thought it was time to step things up and see if we can’t get more publicity by targeting Coles and Woolies. Not by name, obviously, because they’ve got lawyers and resources, but everyone will know who we’re talking about. We got that idea from the Government.

“Christmas is the perfect time and target for this campaign, because we know Australians really value history and tradition, and the last thing they want is Middle Eastern influences creeping into Christmas celebrations where they don’t belong.”

Responding to criticism their campaign is based on racism, Mr Bigget said: “Look, we categorically deny that. Our concern is about consumer rights, not racism. People just want to know that they can tuck into their Christmas ham without risking becoming Muslim.

“If that happens to negatively affect a few people who aren’t white, Anglo-Celtic, or Christian, then that’s unfortunate, but it’s the price we have to pay as a society to protect my rights. And maybe they want to have a good, hard look at themselves anyway.”

Mr Bigget was unwilling to be drawn on the specifics of future plans, but confirmed the group was looking to expand their focus. “We’ve been looking at an anti-kosher campaign, but some members are worried that might be a bit too obviously … you know. Some of us are keen to have a go at vegetarians, but we’ve found they’re a bit hard to questionably stereotype in a scary way — apparently you’d be hard pressed to pick most of them out of a crowd. So I don’t know, well see.”