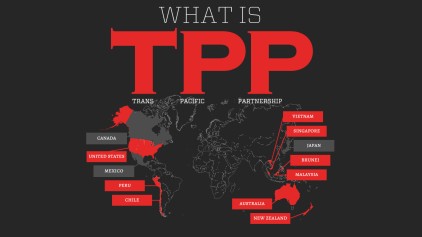 For the past eight years, 12 major economies, including Australia, have been negotiating the Trans-Pacific Partnership (TPP). The TPP is the largest free-trade agreement in history and because of its far reaching consequences, the contents have been kept secret from the people it will affect.

Increasing Red Meat, Heart Disease Exports to Asia: As Asian economies have exploded, so has the demand for Australian beef and bowel disease. The TPP will reduce tariffs, making it easier for Australian farmers to export their wares to a populace clambering for the sweet release of an early death. For dairy farmers, the results are less promising. Australia has been trying to enter the Canadian dairy market for years, but it looks like the TPP will protect Canada’s right to have milk sold in bags, rather than using Australia’s superior bottle technology.

Protecting Citizens is Now a Civil Matter: While many countries are watching keenly for the results of Philip Morris’ lawsuit against Australia for negatively affecting sales of its “Tobacco” brand of lung-cancer dispensaries, the TPP has solidified the rights of foreign investors to take countries before a panel of experts to resolve disputes. Mercury manufacturers are expected to win big here as regulations on mercury, from how much of it can be in our playgrounds to how much of it can be consumed has greatly affected the profitability of mercury.

Hope for Our Vulnerable Billion-Dollar Pharmaceutical Companies: The TPP establishes five- to eight-year patent protections for biologic drugs, which is more than Australia’s current five-year threshold. This is great news for pharmaceutical companies who are the most at risk from having to compete with generic alternatives keeping the price of life saving medicine low. Price-gouging trials have proved promising in America, where CEO Martin Shkreli managed to increase the price of AIDS medication from a sickly $13.50 (US) per pill to a much healthier $750 (US) per pill. While experts stress these outcomes may be hard to duplicate, pharmaceutical companies appear keen to try and replicate these results in Australia.

The Establishment of an Adobe Court: Pirating Adobe Photoshop could now land you before a judge on a floating, criminal justice atoll in international waters. And that’s not a figure of speech. The TPP agreement will also serve as an extradition treaty to Adobe Island for citizens accused of pirating Adobe software. Extradited persons will have to argue their case before a board of 6 shadowy figures who can mete punishments ranging from small fines to being hunted by Shantanu Narayen. The agreement will allow the TPP countries to trial Adobe Island for 30-Days before having to purchase the product.

Four of the Five Shards Of Karath Have Now Been Collected: With the TPP solidifying Australia, Malaysia, America and Japan’s agreement to combine their shards together, the world is now one shard shy of summoning Y’thlla, the Doomed One, from his eternal slumber. Prophecies predict that summoning Y’thlla will bring forth the end of days, and with it, the destruction of all life on Earth. China, which holds the fifth shard, pulled out of negotiations early, but has the opportunity to join the TPP at a later date.

Matthew Farthing is the Economics Reporter for the (un)Australian. Now that the market has begun to rally, he is glad the rope he tried to hang himself with snapped following ASX’s decline last week.