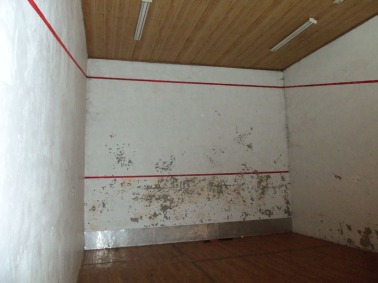 Archaeologists admit they still do not know who built the vast and mysterious abandoned ruins known as “squash courts” that can be found all over suburban Sydney.

“We believe they were constructed by an ancient civilisation that flourished in the 1970s and 1980s but their exact purpose is still unknown,” said archaeologist Delores Shovel. “Unfortunately the peoples of what we call the ‘pre-selfies’ era left no record of themselves on social media and frankly none of us can be arsed going to the library to see if anyone wrote a book about them.”

“Were they places of religious worship? Human sacrifice? Halls for holding of ‘fondue’ parties? We just don’t know,” speculated Arjuna Sherbet, professor of disco age studies at the University of Toowoomba.

“The name suggests they were they prison cells that huge amounts of prisoners were squashed into before being put on trial, but that doesn’t answer the question of why some of them had perspex on the back wall and others didn’t.”

“We certainly don’t think they were recreational facilities despite the presence of fading posters on the wall promoting some substance named Staminade,” said historian Grace Elbowpatch.

“The squash balls found at some of the sites are just too unbouncy to be associated with any kind of game. The same goes for the squash racquets that were recently discovered in the ruins of a Mick Simmons Sports Store. They are too small and impractical to be used for hitting anything, leading us to think their primary purpose was for people to strum while taking part in air banjo competitions.”

The most intriguing theory is that the buildings were classrooms for instruction in the art of geometry.

“The red and blue lines drawn on the walls and the squares on the floor would have been used to teach children about the properties of obtuse and acute angles and how to calculate the area of a rhomboid figure,” proposes rogue mathematician Kyle Logtable. “We know that the ability to draw a good rectangle was much prized by the people of the 1980s, who used the skill in the production of keyboard ties.”

Like Loading...
‹ Bill Shorten Tipped To Knife Himself After Disastrous Polling
Barnaby Joyce Challenges The World Health Organisation To A Punch Up After School ›