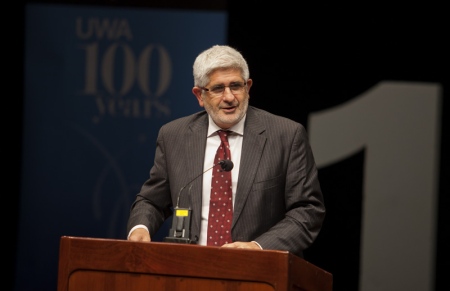 Western Australian local boy Bill Louden is going to Melbourne to compete in the Melbourne Comedy Festival’s prestigious RAW comedy competition after taking out the state finals on Tuesday night.

The professor was a clear favourite with the esteemed judging panel of 30, made up of comedy heavyweights from the Liberal-National coalition.

One of the judges described Louden’s routine as a real “laugh riot” and praised his absurd one liners, including the joke “the evidence shows no reason to defund the Safe Schools program”, which scored huge laughs out of the audience.

George Christensen, the member for Dawson, praised Professor Louden’s unique take on joke telling as the kind of visionary comedic performance that the RAW competition loves to highlight. Mr Christensen predicted that Louden could take it all the way and join other comedy luminaires such as Jonathan Schuster, or Nelly Thomas.

“Professor Louden’s technique is so dry that by the time he makes reference to how same-sex attracted children are more likely to be bullied on the basis of their sexuality, you don’t realise the punch-line has snuck up on you,” Mr Christensen told the(un)Australian.

“The subject matter is so absurd too. Who else but this guy would think of something like the Safe Schools program being harmless, or even beneficial to our children. It’s a dry wit that’s not for everyone, but if you get it, there’s nothing funnier,” he added.

Cory Bernardi, a senator for South Australia and head judge for the final, praised the edginess of the routine: “It’s a very dark sense of humour and it takes real talent to pull off. Most people would be so offended by the idea that it’s the government’s responsibility to protect all children regardless of sexuality, but with a talent like Mr Louden’s, those shocks can become huge belly laughs.”

Mr Louden will be flying out to Melbourne in April to perform in the grand final. Mr Louden’s sense of humour extends to his interactions with the press telling the(un)Australian that he ‘didn’t realise [he] was competing in a comedy competitions’.

Matthew Farthing is the Western Australia reporter for the (un)Australian. If he was the judge of the RAW final, his vote would have gone to Stephen Smith for his belief that he had a chance of becoming Premier

Like Loading...
‹ Man Plans To Drink One Guinness For St Pat’s Day Then Just Switch to Carlton Draught
Fracking Company Executive Arrested For Chaining Himself to Lentil Pot ›