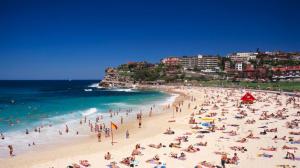 Australia has taken note of New Zealand’s successful social welfare system and is following suit by making everyone currently on the dole go and live in Bondi.

“New Zealand hardly has any unemployment and a low welfare budget due to its policy of bussing the jobless out to Auckland airport and throwing them on the first plane to Bondi,” said Social Services Minister Christian Porter as he unveiled the new scheme outside a fish and chip shop on Campbell Parade. “Instead of facing decades of welfare dependence they all get retrained as bouncers and are successfully returned to society. Or at least they get returned to the footpath outside society’s front door.”

“Our social welfare bill has frittered away to virtually zero under this scheme and I’m surprised it’s taken so long for them to cotton on to it across the ditch,” said New Zealand’s Prime Minister John Key as he creepily stroked a girl’s long hair. “It wouldn’t surprise me if Australia started copying some of our other policies such as swallowing all its vowels and getting good at playing rugby.”

The announcement of a shift in Australia’s welfare policy has remarkably coincided with the Daily Telegraph’s rediscovery of dole bludgers after losing them down the back of the couch for twenty years.

“We’ve been so busy with putting the boot into refugees and greenies that we completely forgot about the threat posed to our way of life by single mums and young carers,” said Telegraph journalist Alvin Outrage. “We were fishing around down the back of the couch looking for the remote when we came across Shane Paxton down there and realised that we hadn’t even thought about sticking it up the unemployed for ages. Luckily we brushed the dust off them, gave them a fancy new name of NEETS and polished up our biggest pair of boots ready to start the kicking process.”

Like Loading...
‹ Senator Roberts Calls For Banning Clouds As They Could Harbour Terrorists
Will Putin’s Girlfriend Be Best Dressed WAG At Tonight’s Syrian Peace Talks? ›