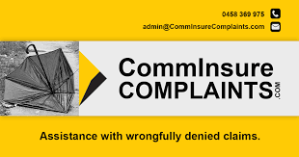 “The work transports the reader into a beautifully constructed fantasy land where one actually believes in the possibility that the exchange of money for a life insurance policy will in turn lead to some kind of payout should the owner of the policy get ill and expire,” said judge Sven Urbydurbydurby from Stockholm. “The kicker comes in the final chapter when the reader learns during a Kafkaesque parliamentary enquiry that the whole story has been a dream and is left with doubts that the money they invested ever existed in the first place.”

“I’m truly humbled to have my writing honoured, especially the recognition that the words “heart attack” were actually just a metaphor for any condition that causes death except in cases where such death is caused by the stopping of the heart,” said proud author Bevan Fineprint. “I like to think that every policy I write is trickier to read than Ulysses and contains just as much incoherent guff.”

The choice of the Comminsure policy document is sure to cause controversy, especially amongst other contenders for the prize.

“I’m flabbergasted that my article blaming the South Australian blackout on renewable energy was totally ignored by the Swedish Academy,” said disgruntled ABC political editor Chris Uhlmann. “Hopefully the people who judge the Miles Franklin Award will recognise it for the outstanding work of fiction that it is.”