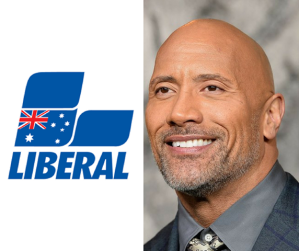 After his success revitalising multiple movie franchises in Hollywood, Dwayne “The Rock” Johnson has been brought in by the Liberal Party to rejuvenate their waning public appearance.

Prime Minister, and head of the LNP, Malcolm Turnbull referred to the signing as a “no brainer”.

“Well he’s very charismatic, seems to have as much of an understanding about politics as the rest of the cabinet, and I’m assuming this ‘Fast and Furious’ movie he was in was a bio-pic about Barnaby’s sex life”.

Mr Johnson is expected to arrive in Australia “sometime after leg day”.

Labor have scrambled to try to add their own box-office appeal to their staffing, with Bill Shorten announcing their marquee signing in anticipation of the next federal election.

“We’re excited to have Shannon Noll as our Shadow Minister for Second Places,” stated the Leader of the Opposition, “we see some perfect synergies with Nollsy, missing out on the top gong despite popular approval”.

Both appointments have sparked interest in Australian politics, with Question Time on the ABC reporting a record 83 viewers.