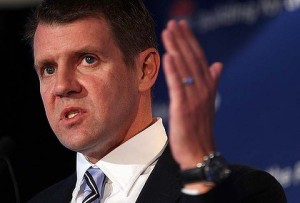 The people of New South Wales have reacted in shock to the decision of Premier Mike Baird to sell himself off to private investors in an effort to raise several billion dollars in revenue.

“Mike Baird is an asset that belongs to all the people of the state and he has no right to flog himself off to some big private equity firm,” said NSW resident Kiralee Waratah. “Does this mean the price of a Mike Baird is going to go way up? Once we’ve sold off Mike Baird he’ll be lost forever. What about the people living in remote areas where services of Mike Bairds are uneconomic. Will they have to go without?”

“I think the privatisation of Mike Baird is a good thing for the people of NSW as it will lead to a much more efficient provision of cool, up to date with social media, surfing Christian political types,” said Professor Dane Rand, lecturer in economics at the University of Sydney. “No-one wants a return to the bloated, inefficient publicly run Premiers we used to have in the 1960s and 70s like Robert Askin and Neville Wran.”

The privatisation of Mike Baird has been warmly received by the Association of Greyhound Beaters, Coward Punchers and People Who Like Traffic Jams.

“I’m going out to celebrate tonight by shooting a whole bunch of greyhounds, belting a stranger in the bonce and sitting on Parramatta road sweltering in my car for three hours,” said a jubilant Tom Dishlicker from the AGBCPPWLTJ. “I’m hoping the next Premier can be formed by merging Gladys Berejiklian, Duncan Gay and Dominic Perrottet into one much larger Premier that will take advantage of economies of scale.”