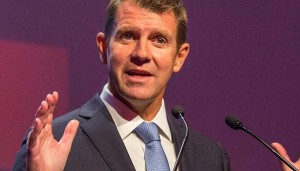 Following NSW Premier Mike Baird’s sudden resignation, the State’s Treasurer Gladys Berejiklian is tipped to succeed him as Premier. A move which pundits have tipped will put the state of New South Wales in a position to finally challenge Queensland, over who’s Premier’s surname is the toughest to spell and pronounce.

Queensland Premier Anastacia Palaszcuk spoke to The (un)Australian about her new nemesis, saying: “I congratulate Gladys on becoming Premier, it’s not often that I congratulate a New South Welshman on anything really, well at least not Rugby League related.”

“I also look forward to working with Gladys on educating the people of Australia on how to pronounce difficult and challenging surnames like Palaszcuk, it’s quite simple really Pala and Chey, not that hard?”

Gladys Berejiklian is tipped to become Premier next week once her appointment has been ratified by Alan Jones.

Mr Baird will leave office and be saluted with a 21 gun salute, the gunshots will be greyhounds being shot.

Like Loading...
‹ Man Covering Face With Australian Flag Calls For A Ban On The Burka
Mike Baird Privatises Himself ›