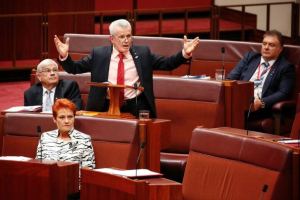 Pauline Hanson’s One Nation party has announced that they are on a recruiting drive, looking on trains and buses for outspoken racists to run as candidates in upcoming elections.

One Nation Senator Malcolm Roberts spoke to The (un)Australian about their recruitment drive, saying: “I’ve seen a lot of intelligent people on Youtube talking about immigration policy. So rather than chasing union reps  like Labor or lawyers like the Coalition we are after good, old fashioned, honest, Aussie racists.”

When pressed on whether actively recruiting racists from public transport was the wisest strategy, Senator Roberts replied: “We are not just looking for racists we are also on the hunt for sexists and bigots, so if you’re against something or someone we want to hear from you.”

“But we’re OK for conspiracy theory nuts as I’ve got that demographic covered.”