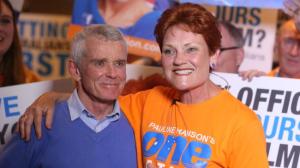 Officials from Britain and India have strenuously denied that Malcolm Roberts was ever a citizen amid claims that both nations have been furiously burning old citizenship records.

“We do have some standards old chap,” commented UK Home Office representative Sir Carrington Poshington-Forbes. “We’re willing to claim ownership of Jack the Ripper and Nigel Farage but you have to draw the line somewhere.”

“Don’t be silly,” said Senator Roberts when asked if he’d ever been to either Britain or India. “You’d fall off the edge of the world.”

The Indian Ministry of Home Affairs in Delhi was unable to comment as the entire staff was busy burning all files marked ‘R’ in a huge bonfire.

The debate over Malcolm Roberts’ eligibility to stand for the senate follows closely the resignation of Matt Canavan from the Resources Ministry after it was revealed that his mother had appointed him to the board of directors of the Adani Group without his knowledge.

Like Loading...
‹ Roberts Accuses NASA Of Travelling Back In Time To Make Him British
Sam Dastyari Claims His Pet Panda Is Totally Legit ›