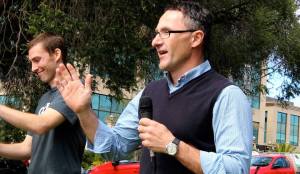 Greens leader Richard Di Natale has announced that the party will hold a nationwide drum circle to look at and analyse their recent election failings.

“We’ve put it off for too long it’s time we all get together with our favourite set of bongos and really thrash it out,” said Senator Di Natale. “I know the results in Batman over the weekend had me banging my head against a wall. So it’s time to put that negative energy into something positive like a drum circle.”

Whilst Senator Di Natale’s drum circle approach has been met with mostly positivity amongst Greens supporters not all of his colleagues are of the belief that it is the right path to go down.

“Whilst drum circles are good at dealing with some issues in this instance I believe that a human sacrifice to the spirit Gods is the best way to deal with our electoral failings,” said Greens Senator Lee Rhiannon.

When asked if she had anyone in mind Senator Rhiannon replied: “A good leader should be willing to fall on their sword. Now if you’ll excuse me I’m off to get my ceremonial cloak from the dry cleaners.”

Like Loading...
‹ South Australia To Decide: Devon, Fritz Or Belgium
Abbott Joins Dutton To Call For The Wallabies To Be Renamed The All Whites ›