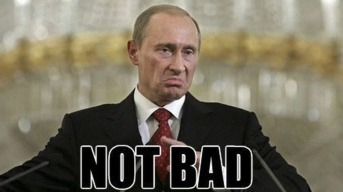 Russian President Vladimir Putin has submitted a review to popular travel site Tripadvisor.com following his recent sojourn to Brisbane, Australia for the G20 summit. Mr Putin rated the visit three stars and said he was surprised by how nice ordinary everyday Australians were to him.

The former leader of the KGB expanded by saying, “the Australian public were very nice to me, I asked one person for directions and he gave them to me with no hesitation or need for me to attach a car battery to his genitals.”

Mr Putin also had some kind words about Australian Prime Minister Tony Abbott, saying: “Tony was very nice man when I arrive he offered to iron the front of my shirt and instead of talking about Ukraine the poor man told me all about his troubles, that evil Senate not letting him charge people to see doctor.”

It was speculated that the Russian leader was unhappy during his time in Australia, as he left the conference early citing a need to catch-up on sleep. When asked by The (un)Australian why he left early, Putin responded: “I needed sleep, as lovely as my hotel was they had me in a room next to Angela Merkel and she partied all weekend, those crazy Germans.”

Like Loading...
‹ Cure For Ebola Triggered After One Million Retweets
Microphone Checks Are Sending The Country Broke: Albrechtsen ›