Malcolm Turnbull To Rename Cabinet The No Scotty Morrisons Club 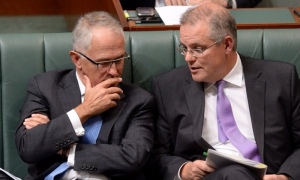 Prime Minister Malcolm Turnbull has after extensive consultation with his ‘inner circle’ decided that Cabinet will now be known as ‘The No Scotty Morrison’s Club’ in a move that has received almost unanimous support from the Federal Coalition.

Speaking to The (un)Australian about the decision the Prime Minister said, “There’s never been a more exciting time to be an Australian, unless of course you’re Scotty Morrison, I kid Scotty and I have been friends for decades and I always treat my friends well, just ask Ian Macfarlane.”

When pressed on how the Government will deliver a budget with a seemingly sidelined Treasurer, the Prime Minister responded with, “Never mind that Lucy and I will knock it up and who knows we may chuck in a few dollars and come budget night we’ll hand it to Scotty and he’ll read it out.”

Opposition Leader Bill Shorten condemned the move, however other in the Labor Party could see some merit in the approach.