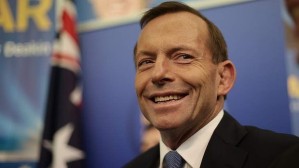 Former Prime Minister and passionate onion eater Tony Abbott has been canvassing colleagues to ascertain if he has the numbers to challenge the Liberal Party’s Fake Tradie.

Fake Tradie has taken the social media world by storm since he debuted Sunday night in a television ad bemoaning the Labor Party for going to war with big business.

Mr Abbott could not be reached for comment. However, former minister and a man tipped as a future leader of the party (admittedly by Mr Abbott), Kevin Andrews spoke on his behalf, saying: “When I think hi-vis and the Liberal party I think of Tony Abbott, why the party needs to outsource these type of things is beyond me when we have a capable and dare I say it virile former Prime Minister in Tony Abbott sitting on the back bench.

“He stopped the boats and I’m sure he can gain us votes — that’s a good one, I should tell my mate Eric about it.”

The (un)Australian sought a comment from the Fake Tradie, but he asked us to ring back as he was just heading out for smoko.