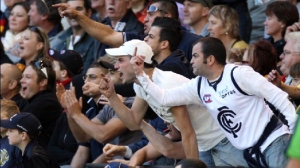 A raid by Fair Work Inspectors over the weekend on the MCG has discovered 44 underpaid students playing AFL for the Carlton Football Club.

“We did have our suspicions early in the season when they looked about as close to winning a game as Wayne Carey does to looking like a normal human being,” said a Fair Work Inspector. “But what cinched it was Saturday’s game. I mean Geelong forgot to turn up for most of it and Carlton still managed to lose.”

“Initially we thought it was match fixing but when a side kicks 5 goals and 15 points on a still day well that’s inexperience more than incompetence or corruption.”

When asked what would happen to the students the Inspector said: “Well we will test them to see if they have any other sporting abilities that may help the country and if not we’ll turn them over to Fuhrer Dutton for ‘processing.'”

The AFL has yet to announce how they will replace the Carlton team however they have started posting ads on Craigslist.

Like Loading...
‹ Channel 7 Stunned To Learn They Paid $150K To An Irrelevant Backbencher
“Disgusting Barnaby” Say People Who Would Totally Knock Back 150 Grand If It Was Offered To Them ›