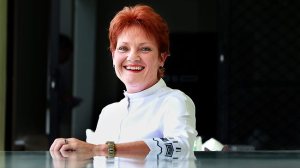 Jewel thieves have stolen the world’s most valuable diamond from the Tower Of London after using a recording of Pauline Hanson’s voice to cut through the security glass surrounding it.

“That glass was designed to be laser, nuclear bomb and lonsdaleite proof, but they managed to slice through it like a superheated katana sword through a tub of margarine,” said head beefeater George Stubbins. “They also shattered every window within a five mile radius.”

“When we inspected up the tower this morning we found the Koh-i-Noor missing from its display case and every raven was denuded of its feathers,” said Interpol detective Sally Brougham. “The thieves had left behind an i-pod with a short loop of Pauline Hanson’s voice on it which we believe was the instrument used to cut a hole in the glass. I daresay they didn’t want to take it with them lest they accidentally listen to it themselves and obliterate their own ear drums.”

Police have believe the thieves are the same gang who stole a set of heavy duty industrial strength ear plugs from the Boeing air craft engine testing facility earlier in the week.