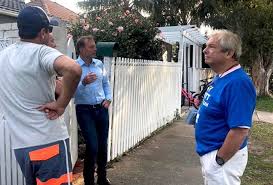 Former Minister for Women and also former Prime Minister, Tony Abbott has told colleagues that Piers pressure will hopefully get him across the line in his seat of Warringah.

“Tony is putting a lot of faith in obscure Daily Telegraph columnist Piers Akerman to help him win his seat.” said a Liberal party insider. “We tried to tell Tony that maybe he should rely on a more popular or well-known columnist but Tony is stubborn and insists he wants to be judged by his Piers.”

When asked whether the party was confident whether or not Mr Abbott would retain his seat the Liberal party Insider said: “Tony is a fighter and doesn’t mind when the battle gets into the mud so don’t write him off.”

“He himself is already telling colleagues that he looks forward to once again leading them in Opposition. Saying there are more onions to be eaten, Princes to be knighted and taxes to be axed.”

Like Loading...
‹ Mundine’s Publicist Sends Thank You Cards To Israel Folau And Julian Assange
Malcolm Roberts Livid After ABC Forces Him To Take Off Tin Foil Hat For Q&A Appearance ›