Home › Sport › Australian Open Moved To Surface Of The Sun

Australian Open Moved To Surface Of The Sun 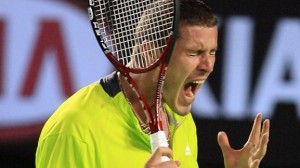 Tennis Australia officials have confirmed that next year’s Australian Open will be played on the surface of the sun after complaints about the heat on Rod Laver Arena.

“We had a good look around for a surface that was cooler than Rebound Ace and found it on the 5778 K mix of gas and plasma on the nearest star to our planet,” said tournament organiser Ray Edmondson. “Of course we’ll cancel all matches if the temperature rises above 5785 K, we’re not barbarians.”

The move has outraged former players who reckon today’s tennis champions are overpaid and soft.

“We used to play barefoot on molten lava back in the 1960s and if we broke a string during a match we had to catch a cat and gut it ourselves”, said five times grand slam winner Rod Rosewell. “I was on fire when I won the Australian Open back in 1956 and didn’t bother putting myself out until after I downed seven middies of Flag Ale at the pub afterwards.”

Meanwhile, Spanish champion Rafeal Nadal has been fined $50,000 for spontaneously combusting on centre court and not completing his quarter final match.