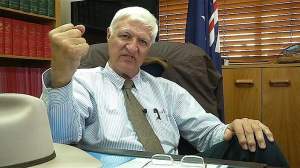 Far North Queensland politician Bob Katter has vowed to form his own House of Representatives next week using the 150 separate personalities from inside his own head.

“I had to kick a couple of them out for being dual citizens but fortunately I’ve got plenty to spare,” said the member for Kennedy as he conducted a swearing in ceremony for his 149 other personalities. “I’ve got a good cross section of the political spectrum rattling around in here.”

According to ABC election analyst Antony Green the likely make up of the Bob Katter internal cranium parliament is a hung parliament with no clear majority for either the Katter Australia Party, the Coalition or the Labor Party.

“The balance of power will likely rest with the Crocodiles Are Scary Party, the Let’s Pull Over And Kill A Drifter Party and the I’m A Piece Of Cheddar Will Someone Rub Me On A Cheese Grater Party,” said the veteran psephologist. “The lone member of the Put On A Cashmere Jumper And Pose In The Mirror Party can expect to be the target of intense lobbying from the majors.”

The first duty of the new parliament will be to elect a speaker. In a radical departure from tradition every personality will take turns in the role, making the latest Bob Katter a good deal more coherent than past incarnations.

Like Loading...
‹ Tony Abbott Begins Fact Finding Tour Of Zimbabwe
Bernardi Demands Schools Teach That 40% Is Worth More Than 60% ›