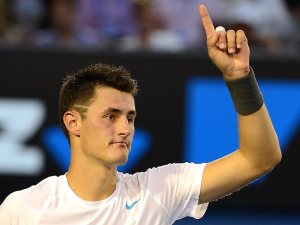 Troubled Australian tennis star Bernard Tomic has confessed in an explosive interview on Channel 7’s Sunday Night that he only stays on the circuit because of the dozens of free tennis balls on offer.

“I’d have given up the game years ago if they didn’t give you a whole tin of tennis balls at the start of each match,” said a candid Tomic in an interview with Melissa Doyle. “Then they give you get a new set every seven games, so I’ve always made sure that I at least make it that far into a match before pulling a hammy.”

“Bernard gives some of the balls to his dog and the rest he uses to play backyard cricket or just for mucking around in the pool with,” said former coach Tony Roche. “If you watch him carefully during a match he’ll tuck a ball into his back pocket just before serving and never take it out again. I’ve seen him finish a match with fourteen balls stashed away in his pants.”

Tomic’s revelation comes on the heels of Boris Becker’s startling admission that he blew his entire earnings from the game on an addiction to sandshoes.

“I must have spent almost $170 million on Dunlop Volleys since I first won Wimbledon,” said a penniless Becker, who now lives under the umpires chair on court thirteen at the All England Tennis Club. “I just couldn’t walk past a Mick Simmons without going in and coming out again with an armful of shoe boxes.”

Tomic pulled out of his 60 Minutes interview at the twenty third minute citing a strain in his tongue muscle.

Like Loading...
‹ Malcolm Turnbull Leaves Abattoir With Sack Of Offal To Feed Far Right
Abbott Wants To Put The Coal Back Into Coalition ›