The (un)Australian’s Person Of The Year 2017 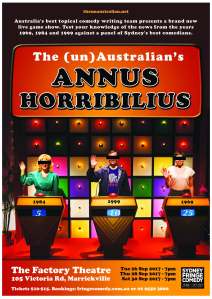 The (un)Australian‘s Person of the Year award is one of the most anticipated events of the year, with defamation lawyers everywhere waiting in anticipation. This year Team (un)Australian spent weeks/months/all year putting off putting together the list and have come up with the most comprehensive list compiled since Buzzfeed Australia’s list of 17 Amazing Emma Watson Gifs You Need Right Now.

If you disagree with our list of nominees, then please leave a comment below with your nomination. So without further ado, here is this year’s nominees:

Feisty 117 year old who managed to get more pollies out of their seat than the start of happy hour at the Member’s Bar. Managed to make us feel sympathy for Barnaby Joyce, a neat trick that many a screenwriter would kill for. Proved itself to be mightier than common sense and reason by removing Malcolm Roberts from the senate.

Managed to cling on due to his position in the powerful “nostalgia for gross seventies style sideburns” faction of the Labor Party, but finally fell on his sword before photos of him driving that tank that was about to run over that guy carrying the shopping bag in Tiananmen Square emerged.

Thought for years to have been shooting duds the 2016 Ashes series has bought Geoff ‘Swampy’ Marsh’s testicles to the fore. His elder progeny Shaun proved that in Cricket the 8th time’s a charm finally delivering on his long promised talent with a gritty century. Younger Son Mitch also gritted out a big century in the 3rd test batting on a very tricky flat deck. Following on from a successful Ashes campaign Swampy will spend 2018 in a breeding program with an eye to the 2037 Ashes series.

When told of his nomination Bob Katter said: “This is great, awards, nominations, celebrations but enough of that how can we be handing out awards when every 3 months someone is torn apart by a crocodile! Bloody trendies and hippies wanting to love crocodiles and bond with nature look where it’s got us. Now does this award come with a gun cause if it does get on your best wet weather gear and meet me in the boat. We’ve got crocs to kill.”

Australia has a plethora of sad narcissists desperately copying every move that Donald Trump makes in the hope that something will stick but only one that makes us feel dirty enough to think “I once voted for that mug”. Ready to pick a fight with either Anne Frank or Mother Theresa once he’s finished his stoush with Rosie Batty.

*Sam Dastyari asked to not be considered for this award as he was holding out for The (un)Chinese person of the year award.

**Mark Latham will be appearing at The (un)Australian’s Person of the year award via satellite as we were unable to get a taxi company willing enough to risk their driver’s safety in order to deliver Mr Latham to the ceremony.

On behalf of  Team (un)Australia thank you for visiting the site and have a great festive season, we will be back Jan 3rd with the all the best news, analysis and plagiarism.