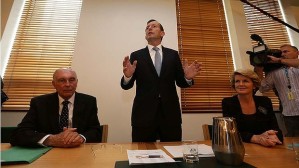 Former Prime Minister Tony Abbott has stunned colleagues by launching into a tirade in the party room that featured multiple “C bombs.” The tirade was triggered by Minister for Energy Josh Frydenburg’s National Energy plan.

“It was very awkward and quite frankly uncalled for, Tony needs to pull in his head,” said a Party Insider. “I mean how dare he use such language to accuse us of, well forgive me for what I’m about to say. But how dare he insinuate that we will launch a car….a carbon tax. Oh I’m sorry there is no excuse for dropping the C bomb this close to an election.”

When reached for comment Mr Abbott was unapologetic for his actions, saying: “When action needs to be taken I will not skirt around the issue. I’ve knighted Prince’s, axed taxes, eaten onions and shirt fronted World leaders. So don’t think for a second that I won’t fight to the death for coal.”

“Should this battle over coal versus renewables cause a few casualties like say a sitting Prime Minister and his Government then so be it. Now if you’ll excuse me I’m off to continue my no-sniping or under-mining tour.”