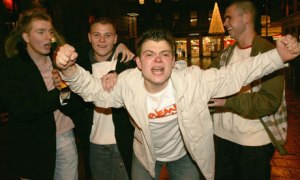 The Twittishpere has breathed a sigh of relief over news that Political Correctness is sane once again after taking it’s medication.

“It has been a rough couple of years for Political Correctness, what with every man and his blog declaring it had gone mad,” said prominent Tweeter @2TweetsNoYup. “But now it appears the worst of it is behind it and we will no longer hear it’s political correctness gone mad.”

When reached for comment a sheepish Political Correctness spoke of it’s recent problems, saying: “Ah look it’s been a rough couple of years, I have had my fair share of scraps. I’ve definitely thrown a lot of right hooks. But those days are behind me.”

As part of it’s new found sanity Political Correctness has severed contact with a number of old acquaintances. Namely The Australian, Herald Sun, Daily Telegraph, Andrew Bolt, Skynews, Miranda Devine and anyone over the age of 65.

Like Loading...
‹ Woolies Scrap Single Use Checkout Operators
Dutton Encourages Parents To Smack The Compassion Out Of Their Kids ›