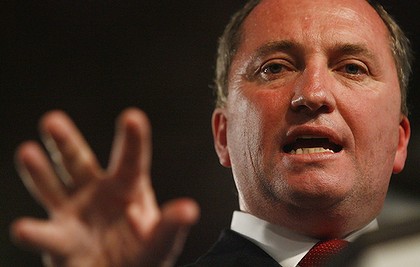 Former deputy Prime Minister Barnaby Joyce has lashed out at former NSW Opposition leader Luke Foley over the alleged allegations made against him and told him to take the time to have a long, hard, look at himself.

“Mr Foley needs to take this time for some self-reflection,” said Special envoy for the drought Barnaby Joyce. “He needs to learn how to treat women with respect, like I do.”

“I mean heck I married one, made four of them and had a child with another. I know more about women than Mel Gibson.”

When asked whether his stance was somewhat hypocritical given the allegations made against him in the past Mr Joyce replied: “You people in the media are always looking in the past. You need to stop that and look ahead. Ahead to a country with me Barnaby Joyce leading the way as deputy Prime Minister.”

“Of course I will only be deputy Prime Minister should the party come calling. Or if something unfortunate were to happen to the current Nationals leader.”

“You don’t know what sort of things he gets up to at Christmas parties do you?”

Like Loading...
‹ Public Appalled At NSW Opposition Leader What’s His Name’s Disgusting Behaviour
‘This Is Just Who I Am,’ Says Man Who Apparently Always Has A Huge Bus Drive Around With His Mug On It ›