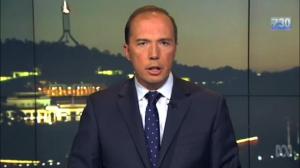 The MInister for the Dark Arts, Peter Dutton has announced that he is looking at solving the youth unemployment problem with the launch of his new initiative, the Dutton youth.

Speaking to The (un)Australian the Dark Lord explained the thinking behind the Dutton youth, saying: “What an excellent opportunity for the youth of Australia to get together, exercise, wear uniforms and swear loyalty to their new leader, Supreme Minister Dutton.”

When asked whether the youth would be paid for being a part of the Dutton youth the Minister replied: “They will receive a youth start allowance and if they excel at tasks they will be rewarded with an internship where they can earn as much as $4 an hour,”

The Dutton youth will be launched later in the year after Minister Dutton first challenges current Prime Minister Scott Morrison to a best of 3 Leadership spills.

Like Loading...
‹ AFP Tells Sky News That They Don’t Rate High Enough To Warrant Being Raided
Barnaby Asks The AFP To Raid A Few Offices And Find Him A Couple Of Good Sorts ›