Nationals Call On Expert Knivesperson Shorten To Take Out Joyce 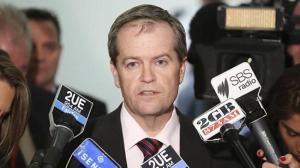 The National party having failed to do it themselves have outsourced the job of knifing their leader Barnaby Joyce to Canberra’s most experienced knifesperson Labor leader Bill Shorten.

“We tried to knife Barnaby but when we got to his office we just felt so sorry for him,” said a National’s Spokesperson. “I mean the poor bloke has a wife, mistress and 5 kids to feed. He can’t even afford to pay rent on his measly $400k salary.

“So like we do with our cattle we are going to outsource the job of knifing him to Shorten. He’s knifed Prime Ministers before so a deputy PM should be a piece of cake.”

When reached for comment Opposition leader Bill Shorten said: “It is a great honour to get the tap on a shoulder to take down a colleague. It has been awhile, in fact it’s been so long since I knifed a leader that I was contemplating knifing Myself just to keep in shape.”

Bill Shorten is expected to meet with Barnaby Joyce later in the week.