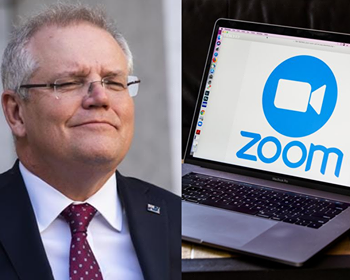 Prime Minister Scott Morrison has reacted with befuddlement when asked if parliament could be run via Zoom.

After spending two weekends watching footy and sinking beers, Morrison announced that they would suspend Parliament due to the threat of coronavirus.

Whilst many Australian businesses have been forced onto Zoom to continue to operate, it appears this wasn’t considered an option for Australia’s politicians.

“Zoom? What’s Zoom? Is it a new drug that the Greens want legalised?” Responded Scomo as his face turned the same colour as Barnaby Joyce.

“If there was a viable option to keep parliament running, we would look into it.”

It’s believed that after the interview, Scott Morrison used his smartphone to Google “what is zoom” and “what’s the weather like on Stradbroke Island.”

Like Loading...
‹ Dutton In Hiding After Learning Of Bill Gates’ Plan To Chip Humans
Kelly Gang Commended For Wearing Masks ›